GG Glass has announced the formation of Special Projects, a new division that will form part of the wider GG Glass Group.

A new national team of eight has now been appointed and is fully operational focusing on high level, complex and bespoke works. The team has been borne directly from the recent collapse of rival firm, FGS, which subsequently saw GG Glass recruiting all of the Special Projects team members and integrating the business into the firms wider operation.

Sam Grant, Operations Director at GG Glass explained: “The work delivered by the GG Glass team sits quite separately from the rest of the business and undoubtedly fills a clear gap in the market. Special Projects will offer bespoke works, often requiring prefabricated units, specialist access equipment and a very specific skill set.

“The team we have appointed have already established a sound business model that was in its very early infancy before the collapse of FGS. For us, taking on the team and establishing our own division made huge sense. Not only are we adding an important service stream to our business but we have the opportunity to take on a highly skilled and experienced group of people whilst strengthening our own team and the wider business.”

Projects delivered range from luxury residential schemes, replacement of glass panelling on major landmarks such as Tower Bridge, reactive and planned works at leading brand mulit- storey building including Google, Unilever, Johnson and Johnson as well as more unique settings such as London Zoo and her majesty’s prisons.

Sam added: “The focus of Special Projects will sit very much in-between our current service streams, Contract Glazing and Emergency Glazing, and can be considered more complex and detailed than much of our current work. The launch of the division is a great move for GG Glass as we continue to consolidate our position as the commercial glazing contractor of choice for the industry.” 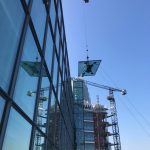